EMERGENCY ALERT 2nd Vaccinations ONLY - no Drive Thru vaccinations Read On... 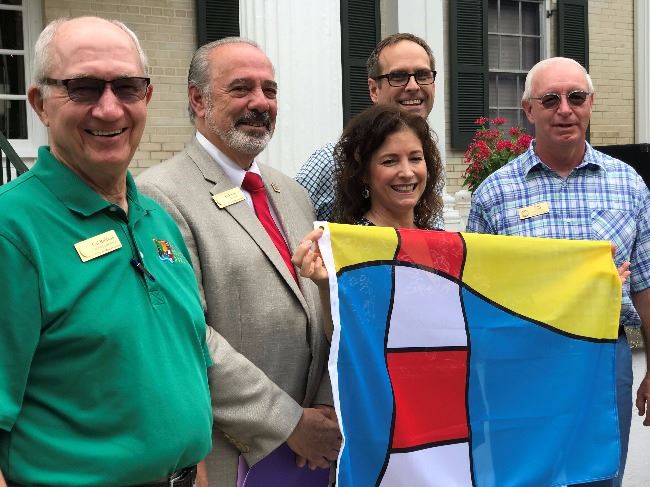 Our city flag was raised on June 14, 2017, Flag Day, in front of City Hall at 10 a.m.  In attendance were city, local, state and county officials.  The Mount Dora Police Honor Guard presented and raised the flag while Mayor Nick Girone led the crowd in the Pledge of Allegiance.

Council Member Slaby requested for City Council to permit him to make a presentation by Roman Mars via Youtube titled “Why city flags may be the worst-designed thing you’ve never noticed.” Council Member Slaby felt the city should consider creating a city flag and suggested at the October 18, 2016 meeting for Council to approve the City Manager implementing a flag submittal program. The City Manager arranged for the advertisement and rules to be placed on the website and administered the Flag program from January 2017 to March 22, 2017.

The submittals were then turned over to the Public Arts Commission on March 28, 2017. As the entries were displayed on the monitors in the boardroom, the Commission went through each of the 58 entries, discussed the criteria and explanations for each submission, and reviewed the rules and guidelines for the contest. The panel narrowed down the submissions based on a scale of one to five, with five being the top choice.  With comments and viewpoints from each panel member being discussed, the top five finalists were selected. The panel then unanimously voted to pass along these selections for City Council members to vote on.


If you would like to use the likeness of the City of Mount Dora flag please use the following links to download: